Our experienced team of speeding offence solicitors is here to provide you with specialist legal advice and guidance when you need it most. If you have received a Notice of Intended Prosecution, a Single Justice Procedure Notice, or if your case has progressed to a Court hearing, contact our friendly team of professional speeding offence solicitors today for instant support.

A disqualification will also be a serious possibility where points are endorsed and the total number of valid points is 12 or more. For example, if you have 6 existing points and the speed alleged is within the middle or top bracket of the sentencing guidelines there will be a risk of a totting up disqualification being imposed. Similarly, if you have 9 points and have been charged with a further speeding offence, regardless of the speed, it may be time to start planning how to avoid disqualification.

Many people wrongly assume that their only option is to plead guilty and accept the conviction. In fact it may be that the best way to disqualification (when on 6 or 9 points) to plead not guilty to the offence you have been charged with, particularly if your personal circumstances are such that exceptional hardship would not be caused in the event a 6-month totting up disqualification. The prospects of success in cases like this vary depending on how well the prosecution case has been presented. Often very minimal evidence is served with a Single Justice Procedure Notice as cases are impacted upon from the pressures of time and costs, with many cases not prepared well for trial (if at all).

Should I contest my speeding charge?

As to whether or not to contest a speeding charge, our advice would be that it depends on a number of factors, such as the strength of the evidence and the personal circumstances of the person we are advising.

There are some cases where the evidence simply does not stand up to scrutiny. One such example is this widely reported case we were involved in. In this case, no evidence at all was served with the Court papers. If after being charged in this case our client had simply accepted the word of the police that he had been speeding instead of pleading not guilty and reviewing the case in more detail, he could have been wrongly convicted and disqualified for an offence he had not committed.

Whether you choose to contact us by phone or by email, the important thing is to do so as soon as possible – whatever the stage of your speeding offence case, the more time we have to explore your options and come up with the best solution the better. We will talk you through your choices and deliver regular updates as your case progresses. We always explain all legal advice in plain English.

What is a speeding offence? 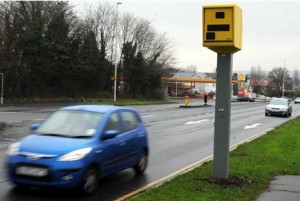 A speeding offence is committed when a motor vehicle is driven above the legal speed limit. There are a number of different speed limits on our roads, for example:-

What are the methods of detection?

The basic principle is that a speeding conviction cannot be based on the opinion of one witness’s opinion of speed alone. Therefore a police officer must corroborate his opinion of the speed using either a speedometer or Home Office approved detection device. These include laser and time/distance devices such as VASCAR.

Whilst the High Court has decided in recent years that calibration is not strictly necessary in order for there to be a conviction for speeding, its importance should still not be underestimated. Where issue is taken with whether the device was calibrated, the police should still produce evidence that the necessary checks were carried out. If the Court is being asked to make a specific finding in relation to speed, as opposed to simply whether a speeding offence has been committed, then proof that a device was operating reliably is in our view still essential.

What grounds are there to defend a speeding charge

There are a number of grounds for appeal (both evidential and procedural) which may be utilised. Below is a list of the most common defences used to fight a speeding charge.

We will examine your case in detail to see if any of these (and other) defences can be used to successfully appeal your conviction for speeding.

What penalties could be imposed if I am convicted of speeding?

There are various different penalties that can be imposed on drivers caught driving over the speed limit ranging from penalty points and a fine through to a disqualification. The penalty imposed will depend on your individual circumstances, how fast you were driving and what (if any) existing speeding convictions you have.

For those drivers who are caught doing 1 or 2mph over the limit in a 30 zones, the punishment is likely to be a fine and three penalty points on their licence. However there may be the option to avoid the three points endorsement on your licence by attending a speed awareness course, depending on the speed the driver was travelling and whether a course has been attended in the three years before the date of the offence.

What is totting up?

If you accumulate 12 or more points on your license inside 3 years then consideration will be given to imposing a disqualification of up to 6 months under totting up. The penalty for this is a driving ban of at least 6 months. However, the court has discretion not to impose a driving ban if the defendant can successfully prove the ban would cause them Exceptional Hardship.

If you decide to plead guilty…

The Court may impose the penalty in your absence depending on the level of speed alleged and whether a disqualification is to be considered.

If you decide to plead not guilty…

The Court will list your case for trial and the prosecution will be required to prove the facts which are in dispute. For example, if you take issue with whether there was correct speed limit signage in force, the police must produce evidence of this at the trial in order to secure a conviction.

What are my chances of winning an appeal for speeding?

The chances of success depend on the state of the evidence, whether the police has prepared the case against you well and, of course, the quality of the representation you have. We have helped drivers avoid additional penalty points, hefty fines as well as an outright bans for speeding. It is for this reason that it is worth speaking to us to see how using our expertise we could potentially help you avoid incurring penalty points or being banned from driving.

Why you should use us to help fight your speeding charge

The internet is awash with websites that will try to offer you a quick fix, some of which offer a dubious guarantee that they will make your speeding ticket go away. It is unfortunately not as simple as that but there are some technicalities in relation to the correct presentation of evidence and procedure which can and do often lead to cases being dismissed.

Kenway Miller Solicitors have an unparalleled record of successfully defending speeding offences. Sometimes a pragmatic approach is required depending on your individual circumstances and the case at hand. The penalties imposed can vary considerably from one case to the next and for that reason ensuring that you obtain the best possible representation is vital.

How much could I be fined?

Am I likely to be disqualified for speeding?

Can the court use its discretion in extenuating circumstances?

If there are extenuating circumstances such as a medical emergency this may be used to avoid endorsement but it must be shown that there was no reasonable alternative other than to drive at a speed above the limit.

I do not believe that I was travelling at the speed alleged - should I ask for calibration certificates?

If you have not yet been charged with the offence but have simply been issued with a notice of intended prosecution, there is little point asking for technical information at this stage. The police are well used to dealing with such requests and are under no obligation to provide evidence. They will normally provide copies of any photographic evidence and will sometimes provide other information upon request. They will normally proceed towards prosecution regardless unless there are obvious flaws in the evidence. Occasionally the photographic evidence will show flaws in the speed measurement, but requesting calibration certificates does not normally serve any purpose.

If you are charged with the speeding offence and wish to challenge the speed reading then you are entitled to ask for whatever technical information you believe to be relevant and this can be passed on to an expert witness if appropriate.

I didn’t hear anything after the alleged offence until after 14 days - am I in the clear?

I received an NIP but haven’t heard anything since - will I avoid prosecution?

6 REASONS WHY YOU SHOULD USE US